See what others have to say

"KueIt made it easier for me to load up my sounds. No more instant replay…KueIt makes it convenient now to have everything in your laptop and ready to go. Those people that are old school and still doing the old thing, take your career… renew it, and 'GET FAMILIAR' with KueIt!"

"KueIt allows DJs to step their game up. You can play like a radio DJ in front of a crowd, KueIt is one of the hottest new programs to hit the market."

"KueIt is incredible, you can have your profile hooked up... so when I gotta do my radio show, on the air, on the internet, in the club, you're ready to go! KueIt is the way to go... go get KueIt today. Trust me, you won't go wrong!"

"KueIt is the truth...you better get with it baby, DJ Clue told you so. CLUEMANATIIIIII"

"KueIt is the perfect program to run all your drops and jingles without having to hook up an external unit. It's user friendly and has all the features you really need as well as constant upgrades adding more features in the future. A must have for any DJ!"

"KueIt changed the game! The way I do radio, mixtapes, clubs, and T.I.'s shows has now been revolutionized by KueIt! I used to have to carry around a bulky machine and now I can get everything done with my laptop and the KueIt program!"

"KueIt is a program that I use to perform at my live show. It replaced my bulky hard drive machine and made my life on the road much easier. I use it as a performance tool, but DJs can use it to rock all their drops and sounds on the radio or in the club. This product is revolutionizing the game."

"KueIt makes my life (DJing on the radio) easier, and it's extremely user friendly. After using it for only a few minutes, I felt comfortable enough to take it to the radio and get busy with it live on the air."

"I use KueIt at my live performances. It's perfect because I no longer have to carry my $3000 sampler all over the world to do my gigs. All artists really need to look in to this. It's perfect."

The Official MC of DJ Bob Sinclar, Mr. Rock This Party aka The Trans Atlantic Champion

"If you stay on the road constantly and you use the 360', well you won't need it any longer. This software is called KueIt, and it's Mac & PC compatible. You need to purchase this. Be the leader that you are and make this the #1 product for the DJ."

"KueIt allows DJs to step their game up. It's perfect for running all your drops & sounds on the radio and in the club. Don't be one of the last people on it. DJ Pharris told you so! Go cop that KueIt today. You need that!!"

"Kueit Pro is THAT $#@%! This program is a great add on to a DJ's ever-growing repetoire.....Kueit will help any talented Dj accentuate his mixes to the "next level". It is a cliche, but it is true......if you have the creativity, Kueit will help you make that magic happen!"

"KueIt took my drops and sweepers to another level for me on my mixshow at Latino 96.3 FM in LA and at the clubs. I'm able to do things quicker and smoother."

"Kueit is HOT! I use it, and you should too! This really helps to add the final touch to your mix."

"Wow! This changes the game. KueIt will take your DJ sets to that next level. I know next time you see me play it's gonna be trouble. You better hop to it with KueIt."

"It's like having an Instant Replay on your laptop with out a carrying case and cords. Very easy to work and customize your hot keys. It's a must for every DJ and on air personality!!!"

Eric V of the Bakaboyz

"KueIt is definitely the truth... for all DJs who like using samples in their mixshows, drops, bombs, horns and all types of effects. You need to learn it, KueIt... It's definitely official and I'm co-signing it to the end."

Play all your drops, jingles, and sound effects, while running other DJ software on the same computer

Performers arm yourself with an arsenal of audio files at your finger tips. instantly select tracks with no delay

Have every sound you need, ready to go with a moment's notice. Instantly trigger the appropriate sound for the big play

Access 310 audio clips for instant simultaneous playback at the touch of your fingertips. It's as easy as a simple key press or the click of your mouse. Or use a MIDI device to control KueIt. Create and store your own library of audio clips for use in playback

KueIt 3 was completely rewritten from the ground up to be compatible with today's hardware. It is faster and easier to integrate with modern mixers, controllers, and MIDI devices. 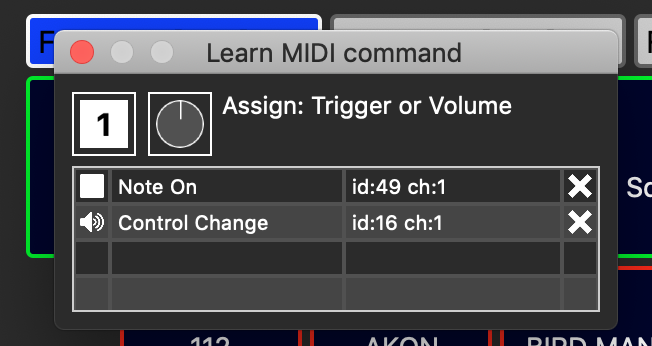 KueIt can read from as many MIDI devices as you have plugged into your computer. Unplug and plug devices with no interruption and no need to re-launch KueIt. New support for 7-bit and 14-bit MIDI controllers

KueIt 3 uses an improved audio engine that renders the complete waveform in a fraction of a second. Set start and end points of your audio tracks with ease

All audio tracks are directly imported into the system. Moved or renamed audio files will no longer prevent your profile from loading

Back up your entire KueIt profile so that you never lose any data. KueIt periodically reminds you to create a backup of your system (Reminders can be disabled in settings)

Make KueIt as large or small as you want. Want to keep KueIt small in the corner but still show all the controls? No problem, KueIt will adjust all the controls to fit in the window

The KueIt Features You Love

It's as easy as a simple keyboard key press or the click of your mouse. Create and store your own library of music clips, sound effects, and jingles effortlessly

Zoom in and out of a waveform to set start and end positions. Set up loops in your audio. Play a variety of different audio file types, including MP3, WAV, AIFF, WMA, MP2 and OGG files. Change file gains independently of one another, along with a master gain

Create a profile and assign audio clips to any of 38 different keys on your keyboard. Simply drag and drop your files to get started. An additional 7 banks of keys expands the number of files you can assign to over 300. In addition, choose from 6 extra stand-alone players outside of the banks, or create extra auto-play playlists. After setting up a profile, simply click the key associated with the audio file to play it instantly. It is that simple

Title and color the keys and groups on your display

KueIt was designed for the serious DJ, producer, or broadcaster that demands highest standards from their equipment

The easy yet reliable performance of KueIt makes it perfect for radio, nightclubs, TV, live concerts, sporting events, school gymnasiums, and anywhere that quality music, jingles, or sound effects are needed. Don't compromise the outcome of your event or broadcast. Go with the system that works... KueIt

Runs on both Mac and Windows

KueIt runs seamlessly on either a macOS or Windows laptop. Use KueIt on Windows tablets to trigger audio by pressing on the screen

KueIt has been translated to English, Spanish, French, German, and Italian. The keyboard layout can be customized to QWERTY, AZERTY, and QWERTZ keyboards as well.

KueIt has stood the test of time

See what others had to say about KueIt, from our earliest days